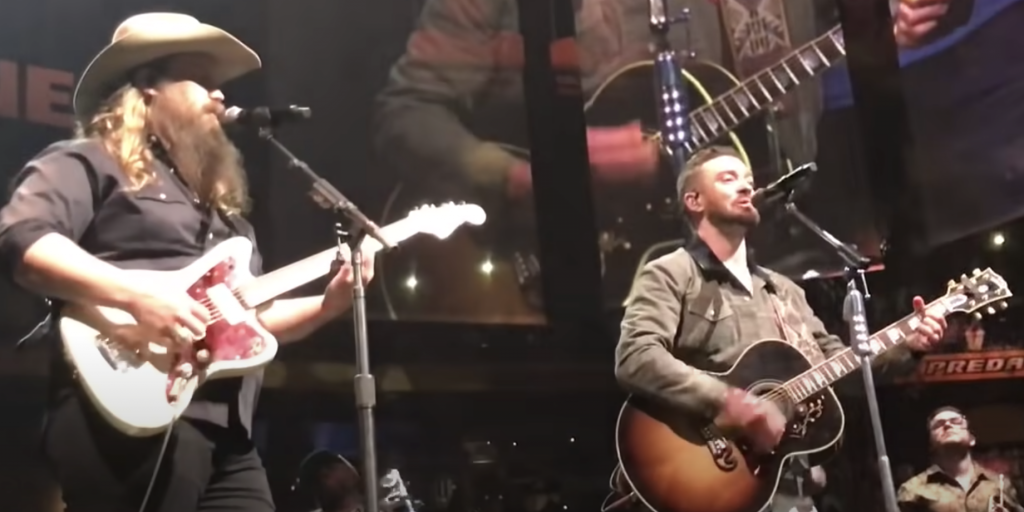 This tale is not about a record in Tom’s collection nor even is it a classic story of how a Leslie and Hammond interfaced.

No, this is the story of how Chris Stapleton and Justin Timberlake came together to create one of the most rousing moments in country music in the past decade. You can watch it here, but first some back story.

Kentucky-born Chris Stapleton had been around the Nashville scene a good 15 years before his debut album, Traveller, came out in May 2015. He had a following from his work with The SteelDrivers and The Jompson Brothers as well as writing songs for numerous big-name country stars. But he was only a household name in places where he hung his hat. He also was fond of collaboration with non-country music artists. He had reached out to Tom Petty with no luck and he expressed interest in performing with former boy band idol Justin Timberlake, who has really proven to be eclectic hit maker not afraid of pushing his career boundaries.

That set the stage for the Country Music Awards in November 2015. Stapleton woke up that morning an up and comer, and ended the night a superstar. We think the Hammond organ had a lot to do with it.

By the time he and Timberlake took the stage, Stapleton already had won New Artist of the Year Award. You can hear the crowd going nuts as he starts with “Tennessee Whiskey,” an oft-recorded song over the years including renditions by David Allan Coe and George Jones. You can’t get much more country royalty than that, but then at the about the 1:07 mark the melodic tones of a Hammond organ join in with Stapleton, his wife Morgane and Timberlake. It’s almost as if they added a fourth singer who just stays there humming the melody underneath the horns, drums and guitars.

By the time he finished the night, Stapleton was a three-time CMA winner and on the path to superstardom. That performance had a lot to do with it, especially the use of the organ. Now, we have listened to some other Stapleton and Timberlake performances of the song, and while good, they miss the use of the Hammond organ.

However, we think Stapleton must have noticed something. On his latest album, Starting Over, which was released in November 2000, there is plenty of Hammond played by the great Benmont Tench of Tom Petty & the Heartbreakers fame.