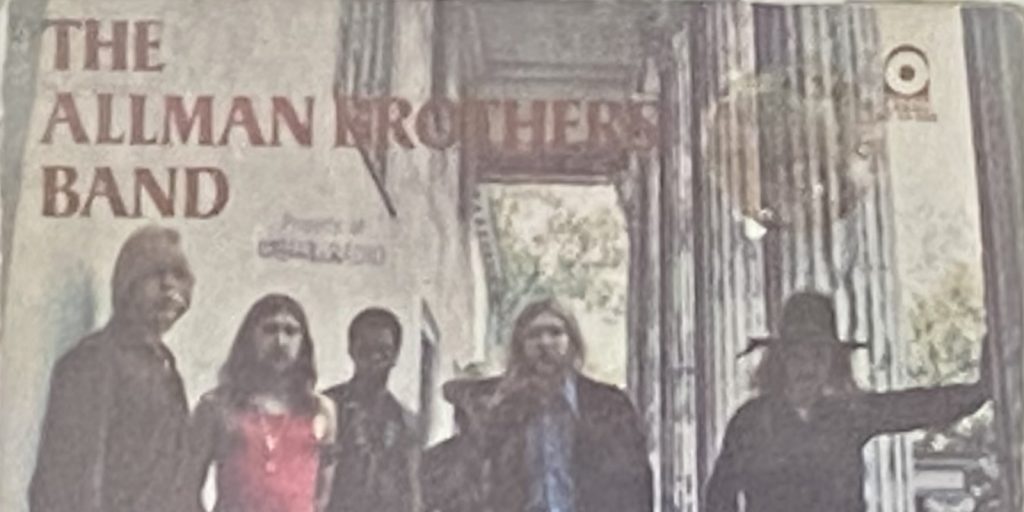 The Allman Brothers Band was pretty much everywhere when I took a job as a DJ at a radio station near where I was going to school at Bridgewater College in 1973. The past three years had seen the Georgia-based band pump out At Fillmore East, Eat a Peach and Brothers & Sisters. The top 40 charts were filled with the band’s uniquely Southern style of rock: “Jessica,” “Ramblin’ Man,” “Blue Sky” and “Melissa” to name just a few. As a young adult in Virginia and not much older than the members of the band, I totally dug (that was a word we used back then) what the Allmans were saying, but I wasn’t a huge fan.

So, it was kind of surprising, while checking out the station’s massive vinyl library, something entitled The Allman Brothers Band struck my eye. Was it new? No, couldn’t be. There was Duane Allman on the cover with the rest of the band standing amongst some gothic columns and he died two years prior. I flipped it around a few times, looking for clues. I recognized some of the songs such as “Whippin’ Post,” which had been on the Live at Fillmore album. Then, I saw in tiny print that it came out four years earlier in 1969. This was a debut album of one of the biggest bands in the world stashed away in a record library.

Timeout for a second for the people reading this blog in the modern age. You may be wondering how and why I didn’t know this album existed. Let me remind you that back in 1973, there was no internet, no MTV, no cable channels showing concerts, nothing that could tune you into what else was happening out there besides what was played on the local radio station, and if you could find it, Rolling Stone magazine. So, I knew this album existed, but because it had sold so poorly, I had actually never seen it growing up in Waynesboro, VA. The local record shops I haunted just didn’t have it, and heading 90 miles into the “big city” of Richmond meant more important things than trying to find an obscure album.

I decided to give this seven-song debut album a whirl. Thirty minutes later (this is a short album), I was transfixed. I heard this band on an entirely new level. They were loud, but soulful. They were doing what every other so-called “blues band” was trying to do within the genres of rock. But where others failed at it, they succeeded. The blueprint for the success the Allman Brothers would soon find was laid out on this woozy little album.

Of course, I need to highlight the use of the Hammond Organ B3 coming through some Leslie Speakers by Gregg Allman as being one of the key elements of the album’s success for me. Gregg was one of the great heralds of both pieces of equipment, and a major part of what gave those early albums of the Allman Brothers their magical sound.