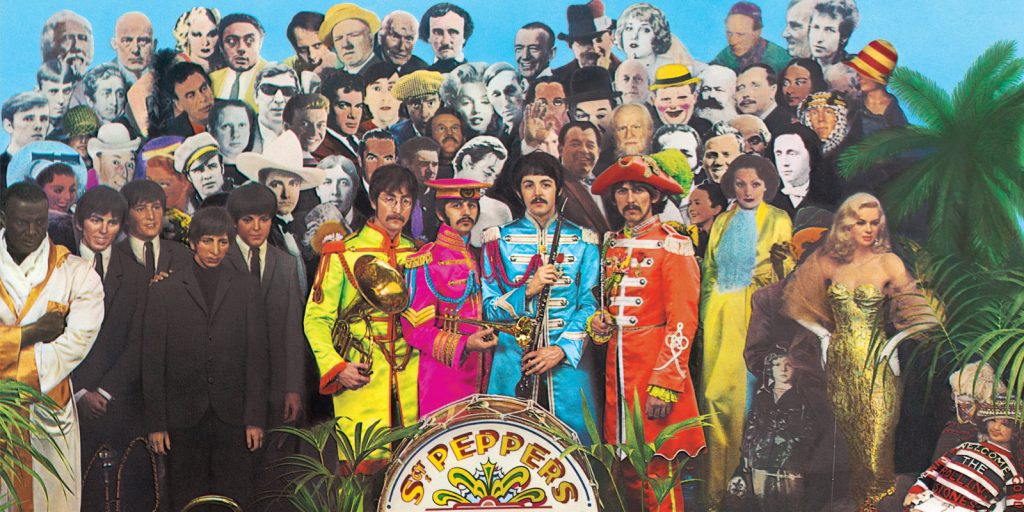 There is a reason that this album often gets listed number one when it comes to ranking the greatest records of the rock-and-roll era. Not only are the songs amazingly listenable to, while being complex musically; not only was the art work like something never before seen; not only was this an actual album – not singles with some filler thrown into it; this album still sounds amazing today. Like it came out a studio somewhere in 2020. It is quite frankly, timeless.

So what else can I say that someone else hasn’t said already? For starters, this album is framed on my office wall. I bet you didn’t know that. Ok, that was an easy one. Let me write a little about the complexity of the lyrics.

The Beatles burst into the American consciousness in 1964 via grayish-blue images transported on RCAs and Panasonics from the Ed Sullivan Theatre to living rooms across America. It’s hard to explain what it was like. I was a little too young remember the Elvis hysteria, but for me the Beatles were just in another orbit. They were the soundtrack of my generation’s childhood. Which is somewhat akin to what Elvis accomplished, but constantly evolving. After his early successes, Elvis became a formula of similar songs played at similar speeds and usually attached to a movie. It was fun, but not memorable. Elvis was singing about getting girls in 1956. He was still singing about getting girls in 1966.

The Beatles went from screaming out the innocuous lyric, I Want to Hold Your Hand, on their American debut to three years later imagining themselves as members of a town band playing songs in a park with lyrics about cellophane flowers, newspaper taxis, and marmalade skies. That was as if Shakespeare wrote See Spot Run and three years later had Macbeth and “out, damn spot.” Where did it come from?

You didn’t dance to this album. You put your headphones, sat back and pondered what you were hearing. Feedback? Animal noises? Stringed instruments wildly playing? As a teen playing bass in a garage band, I wanted to learn to do more than punch out some chords. We all did. That album changed the way music was made.