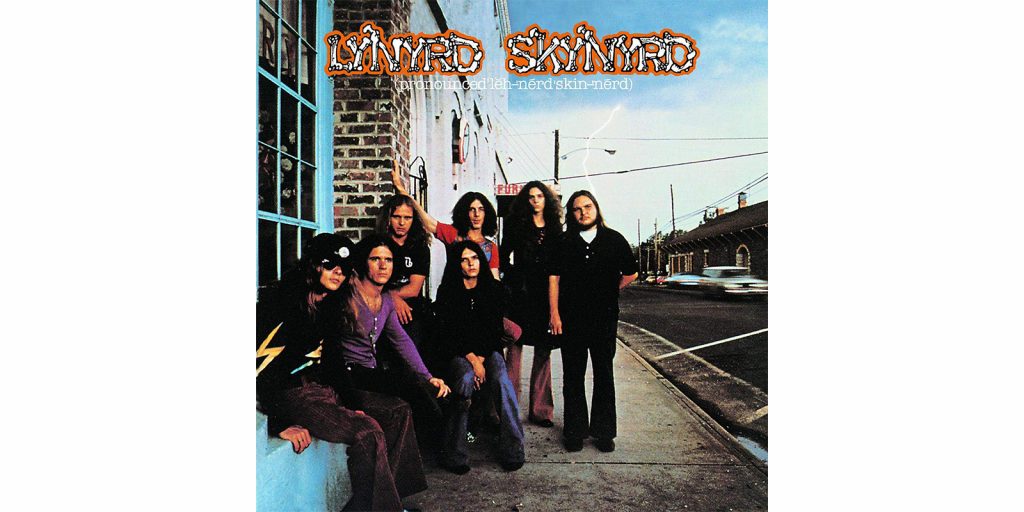 The scene: A record shop somewhere in Northern Virginia

This is how I would start the script for how I discovered one of the loudest and most powerful albums of all time: Lynyrd Skynyrd’s debut, which was titled as Lynyrd Skynyrd (Pronounced ‘Lĕh-‘nérd ‘Skin-‘nérd). I had wandered into that record shop looking for a new album to dig and the clerk asked me who I was listening to at that point. I was on a big Allman Brothers kick (see previous Tom’s Turntable on their first record), and the clerk handed me this album. Right away, I was intrigued. The band was lined up haphazardly on a typical American street in front of the typical American storefront. They had the prerequisite long hair for 1974. It reminded me of an Allman Brothers cover, but there was just something slightly different. I didn’t want to insult the guy, but I had some doubts about this group. These guys looked a little rougher than the other bands out there. Were they outlaws? A heavy metal band a la Deep Purple or Black Sabbath? And what was up with that name? Or to be more precise, “Y” was up with that name?

I bought it anyway because the guy was adamant I would like it. Turns out, he was right. This was Southern Rock on an entirely new level. Their three guitars created a sonic assault that was unbelievable right from the first song on it, “I Ain’t The One.” This was such a great song featuring a great backwards drum track holding it together and some boogie-woogie piano. Fantastic song. The only problem is of the four songs on Side One, this was fourth best because it also features “Tuesday’s Gone,” ” Gimme Three Steps” and “Simple Man.” Two ballads, two rockers. Jammed into one side. This has to be up there with the best opening sides of a debut album ever.

Yet, Side Two blows it away with the inclusion of one grandiose cavalcade of sound known as “Free Bird.” The first time I heard it come through my headphones, I couldn’t believe it. This was as if they took every song on the album and shortened it to an eight-minute epic soliloquy on life itself. Lynyrd Skynyrd had made a musical statement on its debut that most bands took years to discover. This was their opus. This was their “Bohemian Rhapsody.” Their “Good Vibrations.” Their “A Day in the Life.” But this wasn’t done in some mythical recording chamber over months. It was knocked out in a few days in a tiny studio outside of Atlanta.

Actually, one of the fascinating stories about this album was its production. The band had rehearsed the album for months in a tiny shack in the Florida heat before entering the studio. By the time they got to recording studio, there was no improvisation. No noodling around. No arguing over sound. They knew exactly what they wanted it to sound like and how they were going to do it. Not many bands have ever done that in a recording studio and come out on the other end with a major hit.

Now, I have some theories based on these facts as to why this album was so good. This was a band who had spent years playing bars and road houses. They were a live band so therefore, they had learned to play loud. These were not studio guys. The difference is subtle, but you can tell the difference between the sound of a band that came together through years of playing together as opposed to coming together for a few months and then going into the studio. Even on their “softer” ballads, this is a loud band. In an odd way, they were a precursor to the punk movement that was starting hitting the next summer, but the difference, these guys were musicians. Not just guys turning up their speakers and letting it rip.

Because of that, despite the legends of them being the outskirts of the music industry, they were welcomed into the world of the rock cognoscenti. I mean, Al Kooper, who had played on Bob Dylan’s Like a Rolling Stone, produced this album. Their first major tour was with The Who. They covered J.J. Cale songs. They actually liked Neil Young and he liked them. These guys were fantastic musicians and songwriters, which is why this is one of my favorite alums of all time.

And, not to toot our own horn, but we’re pretty excited to see things come full circle as we have been in correspondence of band members – former and current – on this BookerLAB journey.